If it’s not x-shot, it’s not x-treme!!! x-shot blasters- collect the best artillery for awesome, outdoor blaster battles. The most cutting-edge blasters available. Pitch precision and Xtreme blaster power! collect them all!

Find your position, load, aim and… shoot! There will be no match to resist the X-Shot Watchgun. Double shot with range of up to 27 meters per second and 8 darts deposit for fast charging. The rifle has tactile grip, quick trigger and includes 12 foam darts. It is recommended for ages 8 and up. Do you dare move on to action? 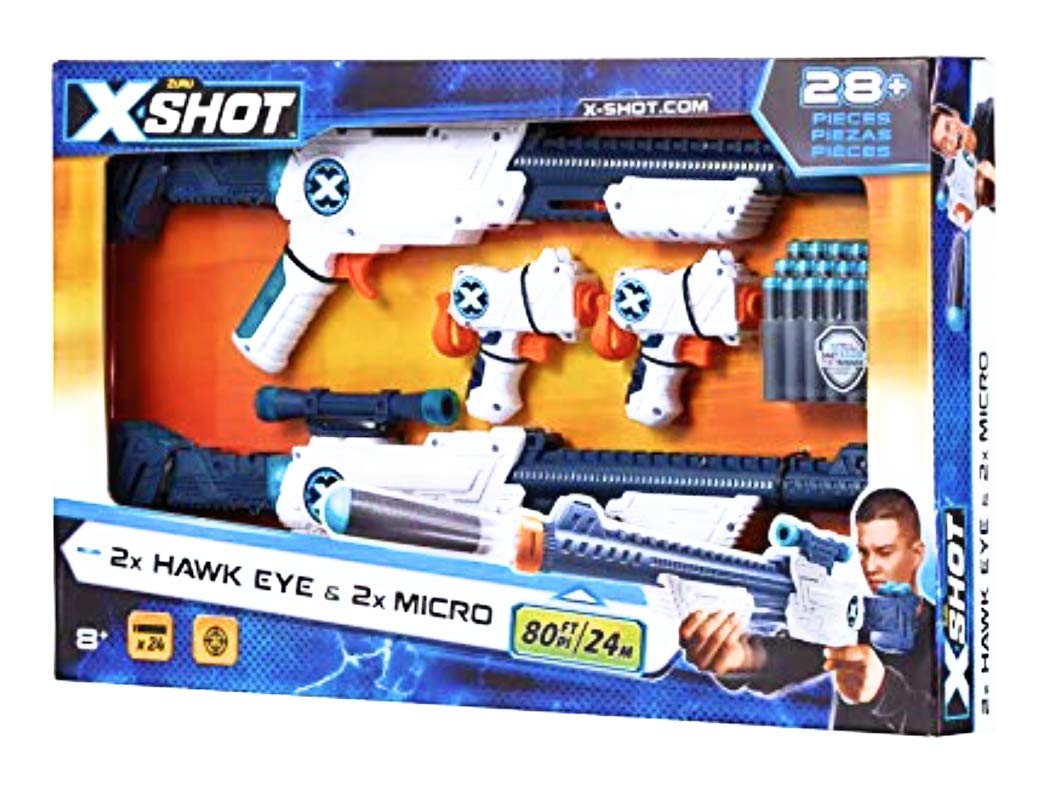 Bring your A-game to the battlefield with this X-Shot Micro and Scope Double Pack Shootout Set! The X-Shot Scope blaster features a detachable scope and pump action handle to take blasters to the next level. The X-Shot Micro features dart storage and pull-to-cock firing mechanism for a compact but powerful impact! With 2 Scope Dart Blasters firing up to 55 feet, 2 Micro blasters, and 24 darts, your opponent won’t stand a chance! 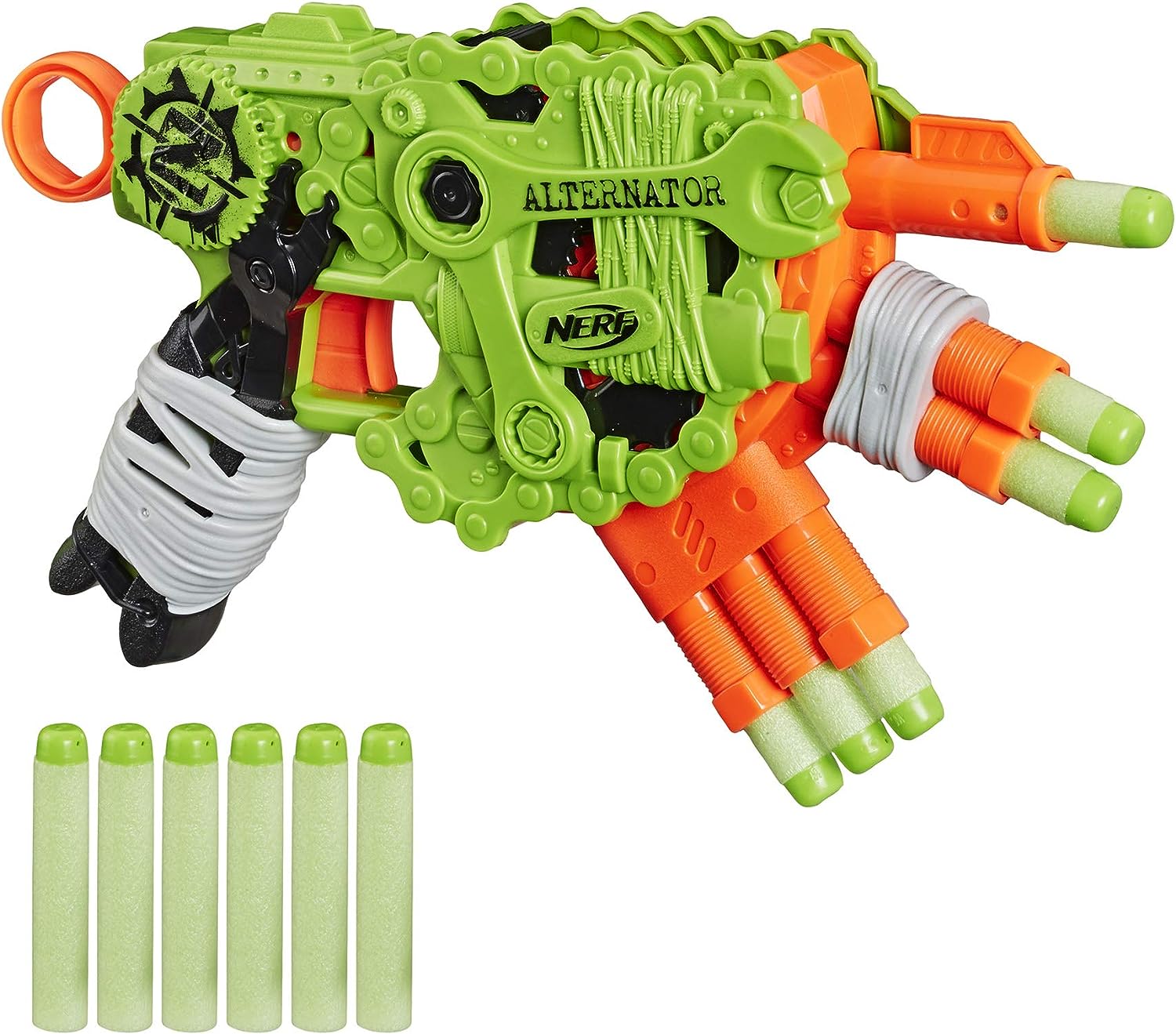 Fire darts 3 different ways with the Nerf Zombie Strike alternator blaster! This hand-held blaster has 3 barrels that you easily move into position to choose how many darts you want to blast — fire 1, 2, or 3 darts at once! The barrels are easy to move by hand, and they’re attached to the blaster, so there are no separate parts to keep track of — just adjust the barrels up or down to select which one you want to fire from. The blaster has a 6-dart capacity and comes with 12 official Nerf Zombie Strike elite darts, enough to fully load all 3 barrels and give you back-up firepower. Official Nerf darts are tested and approved for performance and quality and are made of foam with flexible, hollow tips, which makes them great for both indoor and outdoor Zombie games! Hand-powered (no batteries required).

nerf and all related properties are trademarks of Hasbro. 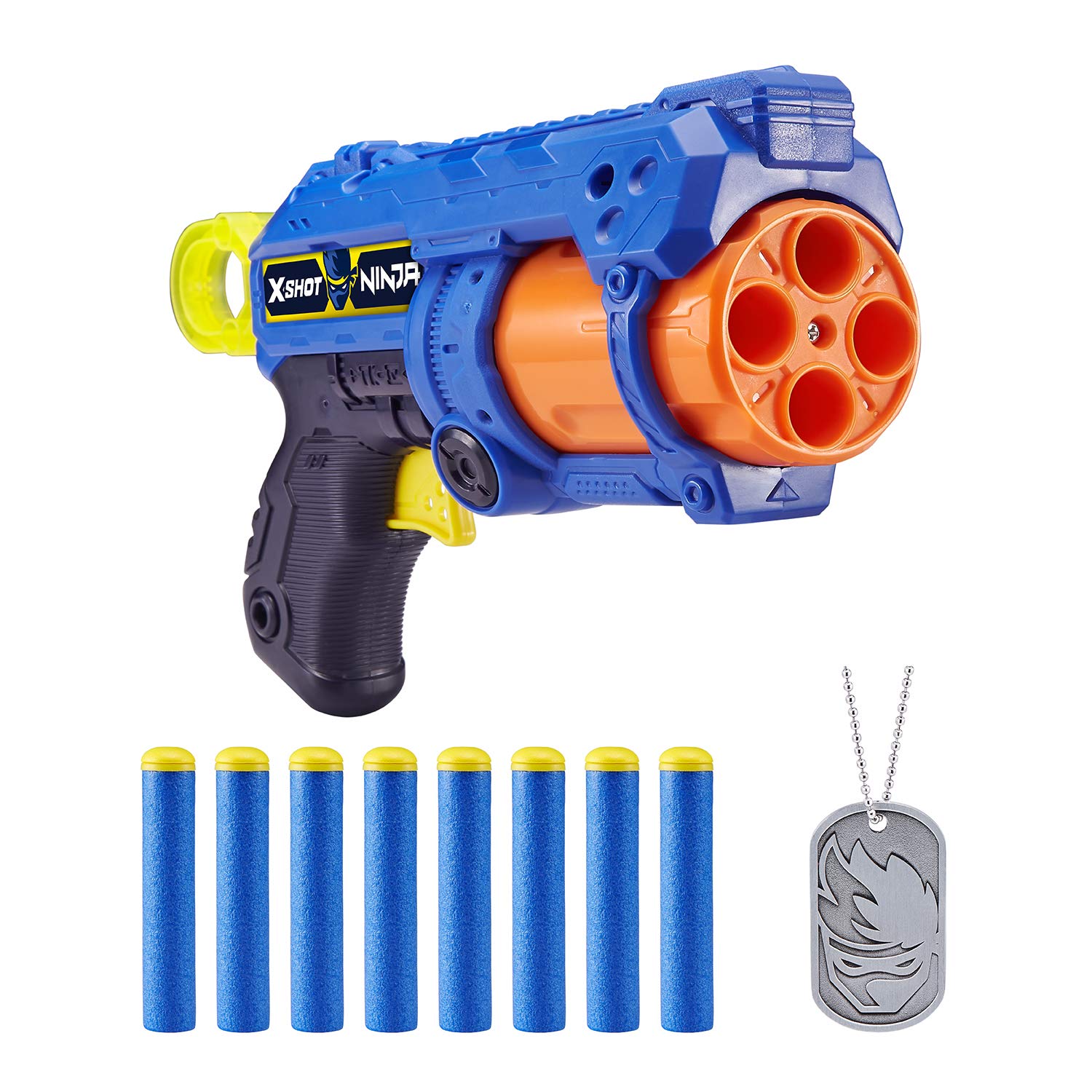 The extremely accurate No Rez allows foam fighters to fire 4 darts in just one round in no time with its automatic rotating barrel! No opponent resurrects when hit by this blaster. It blast up until 90ft/27meters and comes with 8 darts and a high-quality metal Ninja dog-tag.

The Nerf Fortnite ar-durrr burger blaster is inspired by the blaster used in Fortnite, replicating the look of the one from the popular video game! Create a durrr burger wrap by customizing it with the included stickers! Take your Fortnite battles into real life with this Nerf Elite blaster that features motorized dart blasting. Power up the motor with the acceleration button and pull the trigger to shoot 1 dart. It comes with a 10-dart clip and 20 official Nerf Fortnite elite darts, enough to fully load the clip and give you 10 backup darts for reloading. Flip up the 2 sights on the top of the blaster to align your shot. Official Nerf darts are tested and approved for performance and quality, and constructed of foam with flexible, hollow tips. Drop into indoor and outdoor Fortnite action with this motorized, dart-firing Nerf elite Fortnite blaster! Batteries required; not included. 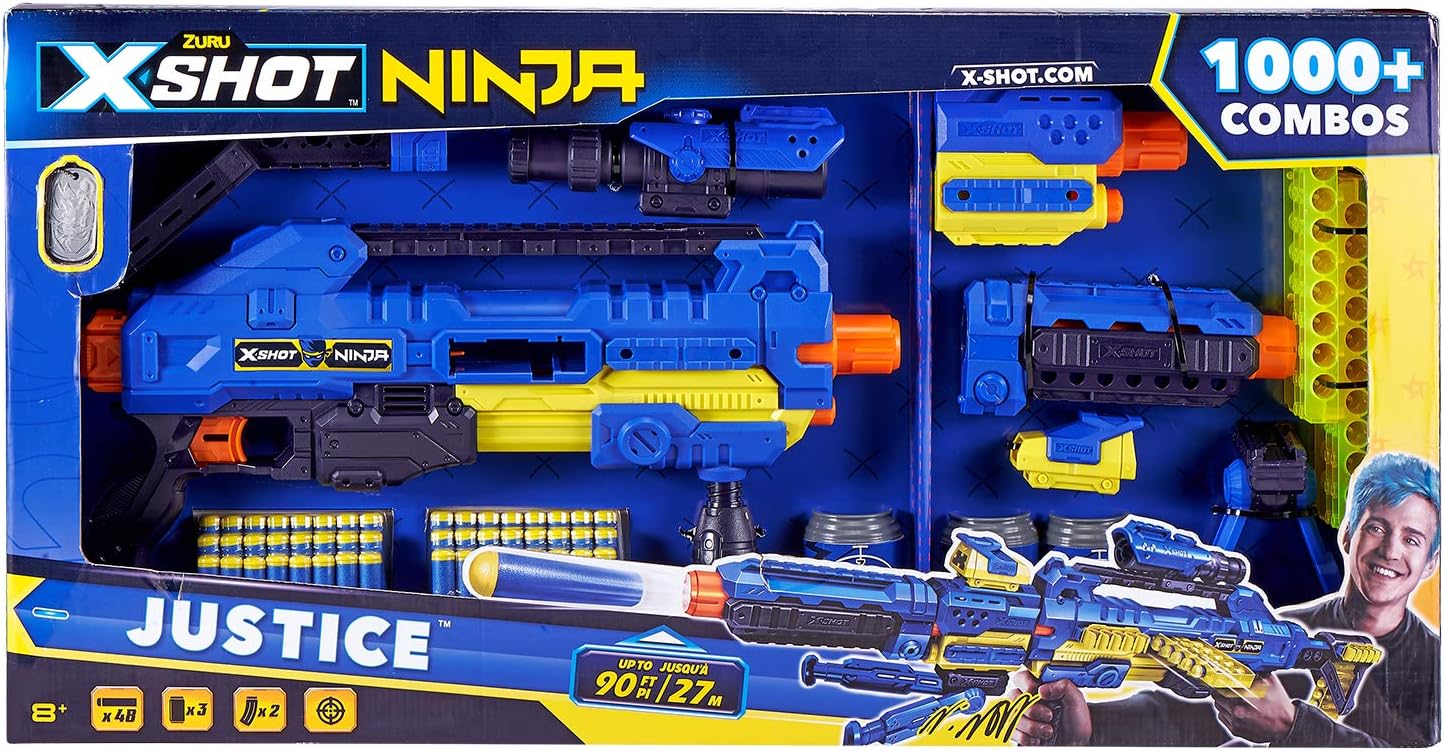 Action and fun with X-shot ninja justice. Refine your goal and get ready to face the most challenging challenges. The set contains so many accessories to modulate it as you want, 3 cans and 48 darts with a range of up to 27 metres. 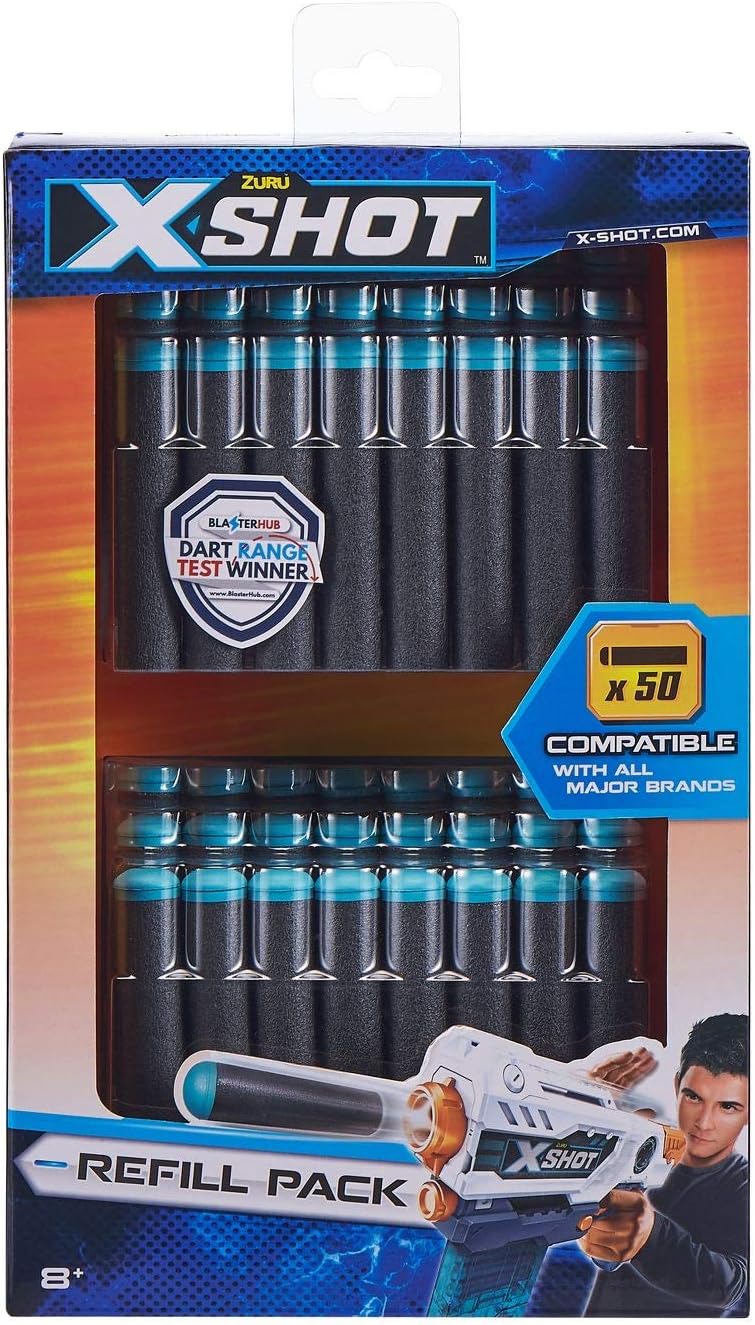 Never lose out on the action with this handy 100 dart refill in window Box! Winner of the Best Dart Range Award for 3 years in a row, X-Shot darts are compatible with most leading brands and offer the best value with its amazing light foam technology! Includes an ammo-box to collect, store and carry your darts anywhere! If the item details above aren’t accurate or complete, we want to know about it. Report incorrect product info. 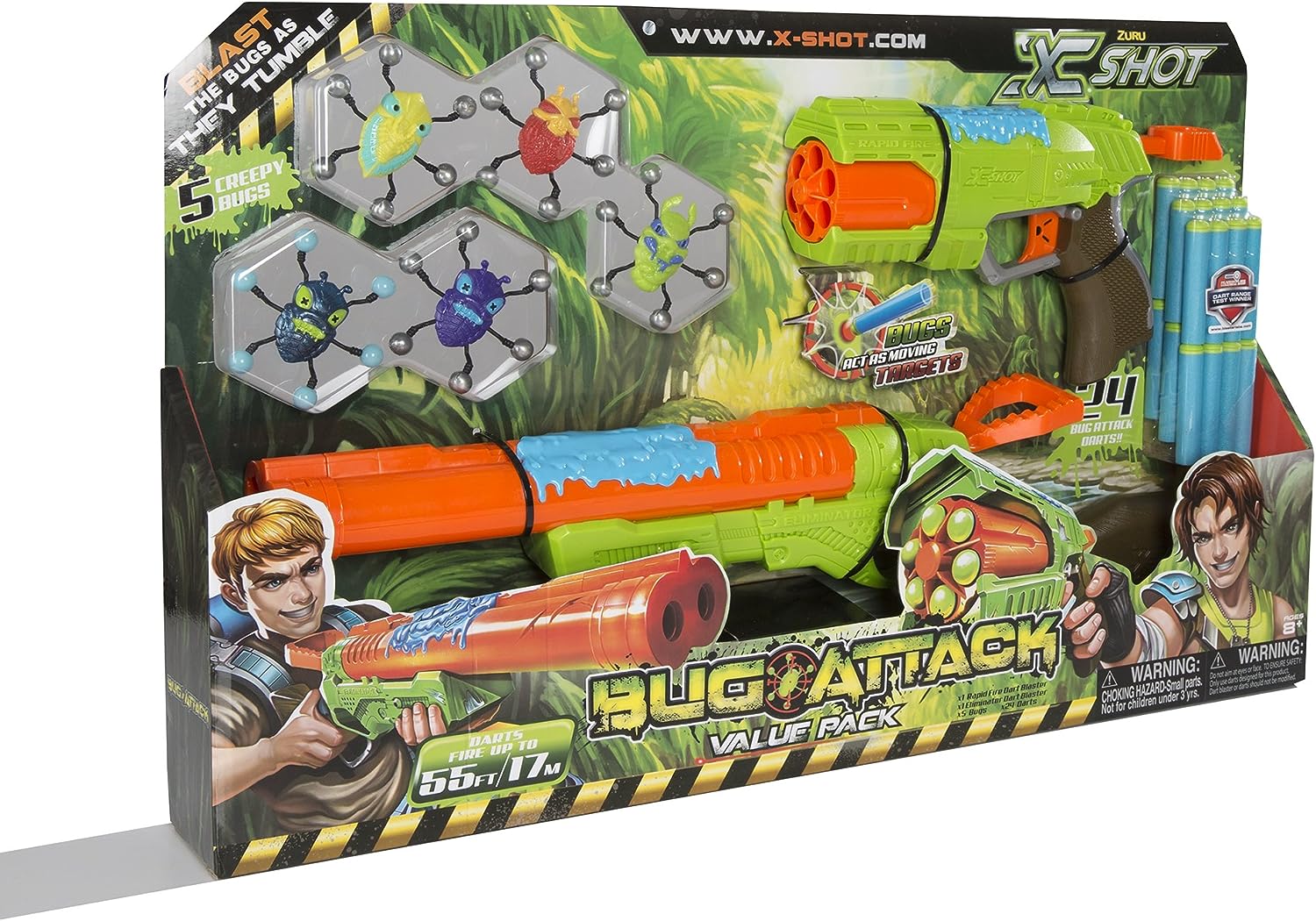 By our suggestions above, we hope that you can found Xshot Ninja Justice Blaster for you.Please don’t forget to share your experience by comment in this post. Thank you!